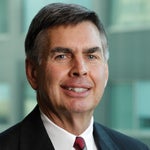 For nearly two years, the automotive industry has been living in a world of uncertainty as the U.S.-Mexico-Canada Agreement (USMCA) renegotiated by President Trump awaits ratification. And all the while, the dark cloud of tariffs on autos and auto parts has hung above us. But it’s not all storms on the horizon. Earlier this month, I had the opportunity to address members of the Automotive Press Association in Detroit about the importance of creating certainty for our industry with the immediate Congressional passage of USMCA.

The reality is that the U.S. auto industry is built on an integrated, global supply chain and is reliant on a favorable trading relationship with our two biggest trading partners—Canada and Mexico. On January 1, 1994, then-President Bill Clinton signed the North American Free Trade Agreement (NAFTA) into law to strengthen trade among the three countries within North America’s borders. Since then, NAFTA has permitted OEMs and suppliers in Canada, Mexico and the United States to ship vehicles and automotive parts without tariffs before final assembly and retail sale.

NAFTA has greatly enhanced the global competitiveness of the U.S. auto industry and has paid dividends to the U.S. economy. Because of NAFTA, the U.S. has become a major vehicle exporter and more jobs were created jobs right here in America.

NAFTA is one example of how trade is an essential element of a healthy and competitive U.S. automotive and parts industry. More than 25 years since NAFTA was signed, the USMCA modernizes NAFTA for our current times and business environment.

The Agreement is vital to our industry. USMCA will maintain auto production and distribution in North America and will preserve the global competitiveness of the U.S. automotive industry. Furthermore, USMCA will reduce the threat of tariffs on vehicles and parts by exempting those produced in North America—enabling dealers to continue providing affordable vehicles options for American consumers.

There’s no question about it: The USMCA is a win for our industry, our customers and our businesses. This is why it’s critical that our leaders in Washington move USCMA forward. Let’s get behind President Trump’s renegotiated deal and make USMCA happen.