It’s a story 120 years and three generations in the making. An American story full of trials, tribulations, struggles and success.

The story starts with two brothers from Italy and a long boat journey on behalf of Fiat, and it ends with an award-winning Volkswagen dealership in Los Angeles.

The story of the Bozzani family and their car dealership includes a train robbery, the Great Depression, motorsports racing, the building of the Pasadena Freeway, and, of all things, Australia.

Greg Bozzani, partner, general manager of Covina Volkswagen (formerly Bozzani Volkswagen) and the grandson of one of the founders of the original Bozzani Motor Car Company, recently shared his family’s history in his own words as part of the NADA Century Award recognition.

“In the early 1900s, the Bozzani brothers, Joe and Amerigo, were commissioned by the Italian company Fiat to scout possible locations in the New York area for a factory to build Fiat cars.

“During the long boat journey from Italy, the Fiat executives decided to abandon the plans for a manufacturing facility in the United States. Upon arriving in New York, the brothers discovered a telegram in wait advising them of the change of heart. [Ed. Note: Fiat did eventually build a facility in Poughkeepsie, N.Y., in 1910.)

“Although disappointed with the news, the elder brother, Amerigo—oddly enough—thought that Australia was the true land of opportunity. He convinced his brother, Joe, to take the train to Los Angeles so that they could secure passage to Australia.

“The train ride proved long and treacherous, so much so that the train was held up, Jesse James-style, and they were robbed of all their money and belongings. They disembarked in L.A. not knowing a soul and headed to the Italian neighborhood section of Los Angeles to lay roots.

“The year was around 1908, and they called for their younger brother, Carlo, to join them. The trio opened a workshop that would repair any type of motor vehicle. At the beginning, they were mostly involved in motorcycles. By 1911, they had secured a dealership for the Dodge, Chrysler and Plymouth franchise and located it in a building at Sunset Boulevard and North Broadway in downtown Los Angeles.

“Although they started in the bustling center of Los Angeles, slowly the three brothers expanded with other locations and franchises. In addition to the Dodge make, they sold cars that are seldom heard of today—Willys Knight, Overland, Isotta Fraschini, just to name a few.”

Part of the Fabric of the Community

“Before the market crash resulting in the Great Depression, they had built their reach to seven dealerships in and around the Los Angeles area. [During the Great Depression] the brothers were forced to close all but the core location at Sunset and Broadway. There they worked through a brilliant career of selling and servicing not only cars but the surrounding community as well.

“They were involved in many activities related to automobiles and motorsport, which included racing vehicles in gas economy runs, and racing bicycles and motorcycles in the then-famous and only wooden velodrome on the West Coast (The Los Angeles Motordrome in Playa del Rey).

“The brothers retired in the late 1950s, and the location was sold and eventually razed for a parking lot, as the downtown city center had move to the south. Prior to retirement they trained Joe’s son, Bob, at the dealership, and this is where he gained his experience and drive for the retail automotive business.

“Bob, being the second generation and of a younger, more modern upbringing, decided to branch out with his own franchise in the early 1960s. He became enamored with the Volkswagen brand, and with the help of an angel investor secured his first dealership in 1962. From there he added Porsche, Audi and BMW, and enjoyed a successful career in automobile retailing, which concluded in 1992 with his retirement.

“Bob’s son, Greg, entered the business with him after graduating college in 1984. The Bozzani tradition had by now spanned three generations, and Greg worked alongside his father while attending the NADA Dealer Candidate Academy, learning all aspects of the dealership departments.

“After Bob’s retirement and sale of the business, Greg worked at other retail dealerships but eventually secured his place in the long line of dealers with—of all things—a VW dealership. He, too, had some angel investors that helped Greg establish himself in the Covina location with Volkswagen and Volvo franchises.

“Greg has maintained the VW location in Covina for over 25 years and had the good fortune of celebrating the family’s 100th year of business in 2011. During this time Greg and his father--who is still with us today—came up with the marketing slogan of, ‘We’ve been in business for over 100 years. We must be doing something right.’” 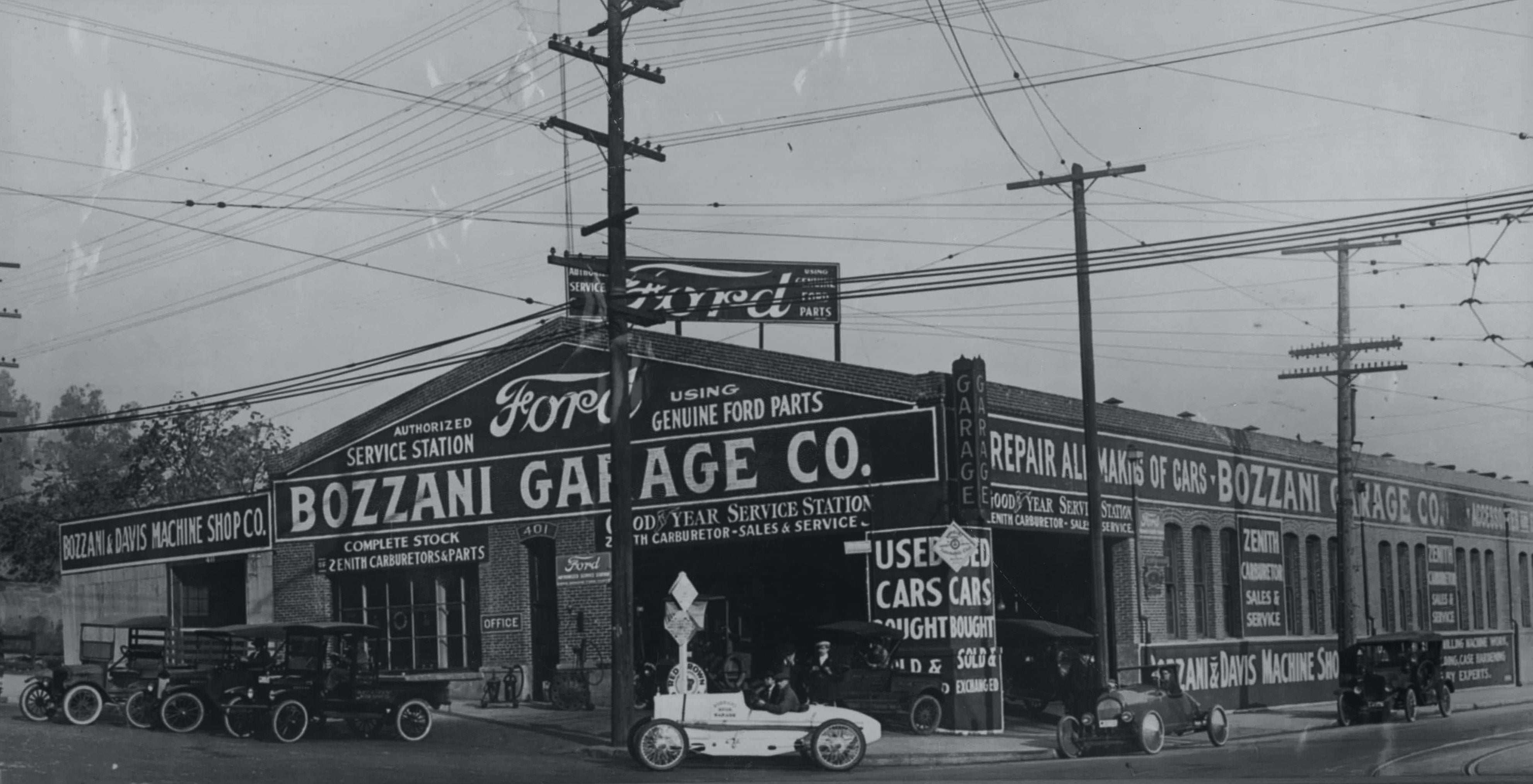