On balance, President Donald Trump has been tremendously positive for the U.S. auto industry.

Less than a month before President Trump was inaugurated, I spoke at the Automotive News World Congress in Detroit and warned that, after back-to-back years of record auto sales, the industry was on the cusp of the first slowdown since the Great Recession. Since ours is a cyclical business, I knew that years of 17-million-plus annual sales couldn’t last forever.

And then a funny thing happened. The headwinds I was seeing eased. The economy, already doing well, really started to gain steam. Jobs were being created at a healthy rate, and unemployment continued to fall. Consumer confidence was up. And the demand for new vehicles remained strong—so much so that in 2017 we had our third consecutive year of new-vehicle sales topping 17 million.

Then came the Tax Cuts and Jobs Act at the beginning of 2018. As of June, industry analysts were again making 17-million-plus predictions for 2018 sales.

It was in this context that an alarm went off when the Trump Administration announced plans to impose tariffs of as much as 25% on imported automobiles and automotive parts, threatening higher vehicle prices and reduced choices for the American auto buying public. Higher vehicle prices and reduced choices could reduce consumer demand and throw into reverse the economic gears that have been driving new-vehicle sales forward.

Why is President Trump threatening action that could hurt our industry and customers? I believe the president has identified and is deeply concerned with three things that are hurting America:

NADA fully appreciates the Administration’s desire to address these imbalances, but we object to the tools being considered by the Administration to achieve these goals. That’s because tariffs or the imposition of import quotas are blunt instruments that fail to account for the reality of today’s globalized auto industry.

No vehicle is 100% domestic

To put that another way, every single American-made car and truck is partially an import. Therefore, tariffs on autos and parts would affect every make and model sold in the U.S., making this an issue that engulfs the entire industry. In addition, when American consumers take their vehicles to a dealership service or body shops for maintenance or repair, the parts used for that work may well have been imported as well.

But far from being burdensome to domestic manufacturing, this interconnectedness has created domestic U.S. manufacturing opportunities for all OEMs—not to mention a wide array of choices for consumers. In 2017, 52% of new vehicles purchased from American franchised dealers were assembled in the U.S. FCA, Ford, GM and Tesla’s U.S. plants produced 29% of all vehicles sold, and the other 23% of new vehicles sold were produced by international brands in manufacturing facilities located in the U.S. Of the remaining 48% of U.S. sales that were imported, more than half were assembled in either Canada or Mexico.

The broad impact of tariffs

Competition by manufacturers, and among dealers, provides our customers with unparalleled transportation options and choices. But this vibrant industry could be undermined because tariffs or quotas could lead to:

In my January 2017 World Congress speech, I described the next four years as a unique opportunity to ensure that personal transportation remains affordable for millions of Americans. We must remain true to that mission.

The tax and regulatory policies of this Administration have renewed business and consumer confidence, and a healthier auto industry pays countless economic dividends at the local, state and national levels. We see that every day in our communities. As dealers, we are optimistic that the Trump Administration can achieve similarly beneficial trade policies without imposing the serious risks that come with auto tariffs. In the coming weeks and months at NADA, we will do everything we can to help make that happen. 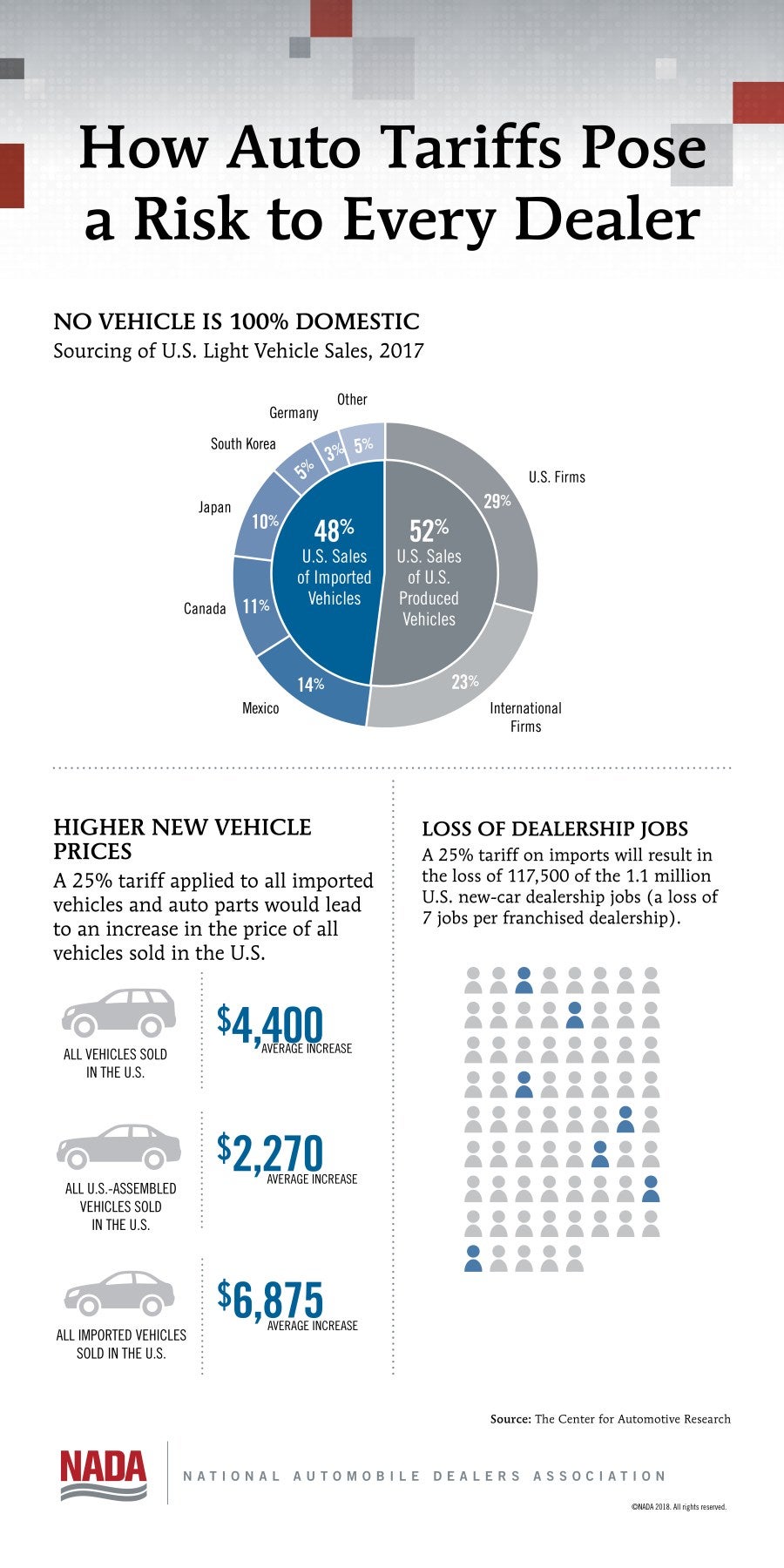