The most successful dealers in 2017 managed to turn what was perceived by Wall Street analysts as the biggest threat to the industry into a primary driver of growth. That threat was the so called “tidal wave” of off-lease vehicles. Instead of a negative, the ample supply of off-lease vehicles became the fuel that drove the growth in retail sales of used vehicles.

According to the Cox Automotive 2017 Manheim Used Car Market Report, leased vehicles that have reached the end of their respective terms, or "off-lease maturities," have grown substantially from a low of 1.6 million to an estimated 3.6 million in 2017. This growth in supply was viewed as a negative when it was also assumed that demand for used vehicles would remain static. For anyone who took Economics 101, increasing supply with a fixed level of demand leads to lower prices. Thankfully, for the used car market, demand has actually increased.

I learned many important lessons from spending 22 years analyzing real estate, but perhaps one of the most important learnings was to recognize that supply and demand are often intertwined. In the right context, supply can create demand. And that’s precisely what we’ve seen with this growth in off-lease vehicles. For dealers who want to thrive in the year ahead, focusing on the used market and capitalizing on still-growing volumes of off-lease maturities will be keys to success.

On top of continuing growth in supply comes an improving mix. We’ll be seeing fewer cars, especially fewer midsize sedans, and in their place, we will be seeing more CUVs, pickups and SUVs. Vehicles that have grown in popularity in recent years in the new vehicle market will be the vehicles that drive growth in used vehicle sales for the next several years. 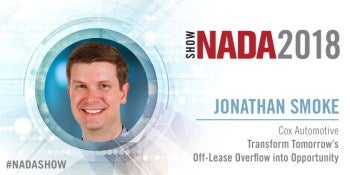