Charlie Gilchrist is taking over as NADA chairman armed with more than 30 years of experience operating automotive dealerships. But he started out on an entirely different career path: accounting.

Gilchrist’s career as a number cruncher was brief because he realized he didn’t actually like accounting. “I like to talk to people and interact,” he says. But all was not lost. “Getting an accounting degree made me a natural at reading financial statements and understanding how businesses operate. My background allows me to look at numbers and understand what makes up those numbers.”

In fact, Gilchrist credits much of his success as a dealer to lessons learned from his experience as an accountant and subsequent switch to the automotive industry: Cultivate and cherish good relationships in your business and in life, treat your customers and employees the way you would want to be treated, and give back to your community and industry whenever you can.

Ask Gilchrist what he does for a living and he’ll tell you he’s a “Ford dealer,” even though Gilchrist Automotive includes Ford, Buick, GMC, Chevy, Nissan, VW, Chrysler, Dodge, Ram and Jeep across eight dealerships in the Dallas-Fort Worth area. That’s because Gilchrist grew up around Fords. His dad went to work for Ford Motor Co. in Detroit before transferring back to Texas when Gilchrist was in grade school. “He went into selling heavy-duty trucks, so I’d been around dealerships a little bit growing up,” Gilchrist says. Still, he didn’t consider going into the automotive industry, because “I never thought I could be as good a salesman as my dad was.”

Instead, Gilchrist went to the University of Texas at Austin to become a lawyer but was advised if he didn't score a high percentage on his LSAT he would be a history major. “So they said to take accounting, it’s a great secondary major to pre-law,” he says. Gilchrist did well, passing the CPA exam before he graduated with highest honors and started work in public accounting at Coopers & Lybrand. Unfortunately, “you don’t get to talk to anybody. You sit in an office and crunch numbers. I’ve got ADD [attention deficit disorder], so to sit there and grind numbers was tough.”

From there he went to work at a dealership owned by his father’s former sales manager, Ken Nichols, and eventually became his business partner. Gilchrist worked at the Kenworth and Ford heavy-truck dealership before getting into the retail car business with the purchase of SouthWest Ford in Weatherford. “Ken Nichols gave me an incredible opportunity to be his business partner,” Gilchrist says. At first, “Ford wouldn’t approve me as a dealer. They said I was too young and didn’t have enough retail experience, but Ken stood by me and forever changed my life.” 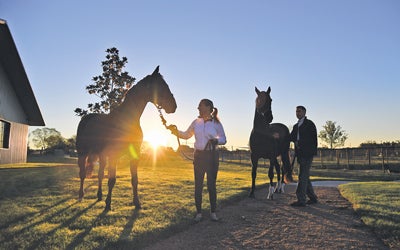 2019 NADA Chairman Charlie Gilchrist and his wife, Trina, spend as much time as possible with their horses.

In 2014, Gilchrist began his first term on NADA’s board of directors, and has served on the Legislative Affairs and Empower Quality Control committees. He’s also chaired the Regulatory Affairs and Industry Relations committees. Those positions have given him a deep appreciation for what the association does for its members, including heading off legislative and regulatory challenges. “When I got involved with NADA, I saw the passion and drive that the NADA employees have to defend dealers and our franchises,” says Gilchrist. As vice chairman in 2018, Gilchrist was front and center for some of NADA’s most important recent initiatives, such as the ongoing fight to protect dealer-assisted financing from overregulation and opposing auto tariffs that would hurt American consumers and dealers. “We have an affordability issue, and we need to make sure our vehicles stay affordable,” he says. “We can’t price these vehicles at a rate that makes them less affordable.”

Gilchrist says he will continue to focus on these priorities in 2019 while adding some new initiatives. He’s particularly interested in finding ways to attract young people to careers in the auto industry, particularly service technicians. “One of the biggest issues is employees—how to recruit, train and retain the best people—and one of the issues we all have is we can’t find enough great young people to work in dealerships,” he says. “We have to get the word out. A dealership is one of the most misunderstood industries, but it’s also one of the most diverse in terms of opportunities.” And as a father of two (Stephen, who runs the day-to-day operations of Gilchrist Automotive, and Reese, a junior at Texas Christian University), Gilchrist wants to get more young men and women involved not only in the industry as a whole but also in NADA. “I’ve been blessed and given a lot, and I’ve got to give back,” he says. “This is my family’s business, so I need to serve to help protect our franchises and advocate for each dealer. I want every dealer, every general manager, every employee to think that they are NADA. That ‘I am NADA.’” To this end, Gilchrist has outlined his vision for what he calls “One NADA” in four simple words: Nurture, Advocate, Deliver and Accountability. His goal as NADA chairman will be to promote each aspect of this N-A-D-A maxim as much as possible.