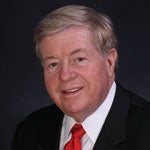 Bill Willis is president of Willis Automotive Group, representing Chevrolet, Buick, Ford and pre-owned vehicles in Smyrna and Middletown, Del. He started in the automotive business when he was nine years old, washing cars at his family's dealership. In 1970, he started at Willis Chevrolet full time as a salesman, was promoted to general manager in 1975 and became president/dealer in 1985. Willis represents Delaware's franchised new-car dealers on the board of directors of the National Automobile Dealers Association. (Term: February 2004-March 2022)