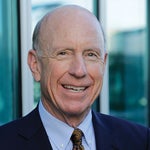 Tim Smith is president and owner of Bob Smith BMW and Bob Smith MINI in Calabasas, Calif. He grew up in the automotive business working in his family's dealership part time during school vacations. After graduating college, he went full time in 1968 as a sales manager in the Volkswagen dealership. In 1973, he opened the BMW dealership with Tim as General Manager. Smith represents Southern California's franchised new-car dealers on the board of directors of the National Automobile Dealers Association. (Term: January 2015-March 2024)