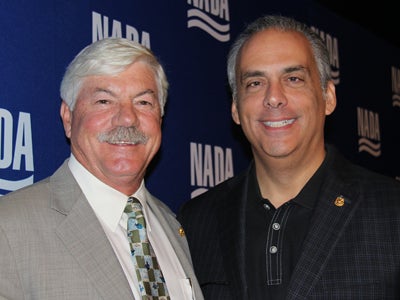 PALM BEACH, Fla. (Oct. 14, 2015) - The National Automobile Dealers Association's board of directors has elected Jeff Carlson as chairman for 2016.

“This is a great honor, and I'm eager to lead NADA as we continue the important job of protecting the interests of America's 16,500 franchised new-car dealerships, and the more than 1 million people they employ nationwide,” said Carlson, who represents Colorado's new-car dealers on NADA's board.

Carlson, who is currently serving as NADA vice chairman, is president of Glenwood Springs Ford and Glenwood Springs Subaru in Glenwood Springs, Colo., and co-owner of Summit Ford in Silverthorne, Colo. His term as chairman officially begins in January 2016. The ceremonial event of “passing the gavel” will occur at the 2016 NADA Convention and Expo in Las Vegas.

Mark Scarpelli, who represents Metropolitan Chicago's new-car dealers on NADA's board, was elected vice chairman. He is president of Raymond Chevrolet and Kia in Antioch, Ill., and is co-owner of Ray Chevrolet in Fox Lake, Ill.

The election took place at NADA's board meeting in Palm Beach, Fla.